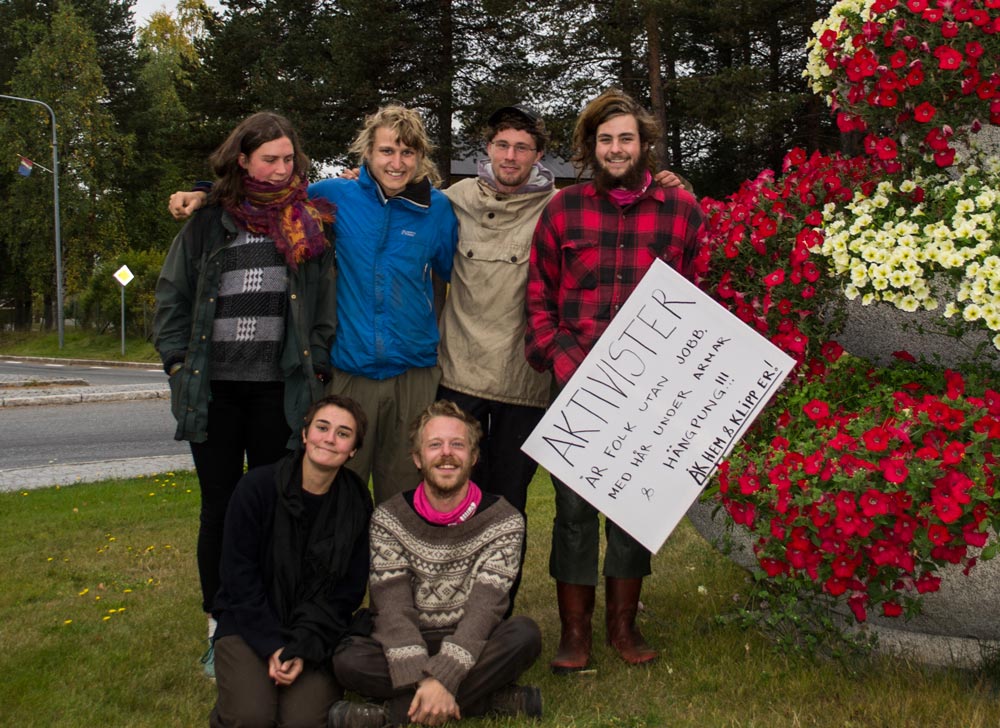 Aktivister i rondellen i Jokkmokk

We are called criminals, activists with hair in our armpits, insane, crazy danes, hippies, environmental whores and more stupid things. But we don’t care, because we know that the industrialists/colonialists just call us that lacking good arguments.

We are hurting the mining industry as a whole according to the mining corp. Boliden. And we plan to continue doing so, because the industries expansion and colonization of the world knows no borders, they don’t feel the trees wounds and the reindeers’ hunger, they don’t care if the water get’s poisoned because it means money for the shareholders. The emissions knows no borders, neither should the resistance against them. We want the corporations colonizing the world to feel the wrath of the colonized rising.

kolonierna.se started as a project to document and show cities, countries and corporations invasion and colonization of the rest of the world. The site became a channel for resisters against british Beowulf minings iron mine plans in Jokkmokk, Sápmi, Sweden 2013. It’s good to have a channel to tell our story about the situation, not being angled through the mainstream liberal media. The aim is to inspire a strong resistance against the system destroying the earth.

Many involved in this project also were in the Ojnare forest when shit hit the fan there 2012.

2014 we organized a small protestival against the mining plans in Norra Kärr Vättern.

2014 we also participated in anti-fascist demonstrations all over the country. Against the Nazis (with and without uniforms).

There are strong forces that wants to wreck havoc on the last wilderness as well as our drinking water and food supply, but we are convinced that we can destroy the destruction if we struggle together! We cannot trust the liberals individualistic solutions and their cynisism. We put our hopes on a diverse resistance against the colonizing system that runs politics, a diverse struggle on all levels in all situations by all kinds of people! We will be called many things, we are criminals in the system of destruction, but we know that many historical figures has been criminals before us.

If you want to know more and to contact us you can email: kolonierna@riseup.net
Don’t be afraid! 🙂

If you still think we are the insane, you can watch this doc: